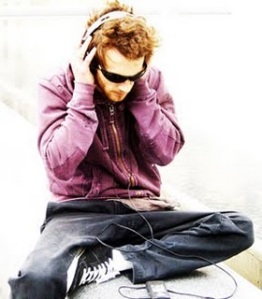 Born in 1979, Anthony Baron lives in Paris and works where the improvisation and the sound creation is going full swing in the world.

It is under the name of Anton Mobin that he produces his radio creations and that he occurs on stage. Anton Mobin’s sound activities evolve in two universes: the improvised music and the radio art.

Sound artist and radio producer, the sound recording and the sound effects are the essential elements of his work of composition.

He defines himself his initiative in the continuity of the concrete music: his approach is directed on the listening of the sounds of the everyday life and their use in the radio composition, to develop an “extensive” concrete music.

Diversion and manipulation of sound objects, trivial fragments and reorganization of the reality are so many ways investigated in his creations. Anton Mobin develops his own methods of composition in which he experiments different constraints of place, time and also technical to produce a unique and personal radio art.

Since 2001, he manages the label of experimental music H.A.K. Lo-Fi Record and curates the project of on-line improvisation ” Impronet “. After some years of animation on Radio Campus Orléans for a broadcast dedicated to the improvised music, Anton Mobin realizes now its own broadcast ” A Maïzing session with ” on the webradio KKWNE and proposes several improvised live sessions with numerous international artists.

In 2007, Anton Mobin joins the team of the webradio ARTE Radio for which he realizes some sound creations with constraints in the group OuRaPo. Within ARTE Radio, Anton Mobin oversees a collective project with eleven international sound artists entitled “Je te pique une frite” and recently, compose the sound creation of the radio drama “Station 11″ written by Bruno Lemoine.

The work of sound creation and Anton Mobin’s improvisation have been physically edited or on-line published by 34 labels in 14 countries worldwide.

His work has been played on different radio shows and sound festivals in France, Norway, Portugal, Germany, Belgium and the United States.